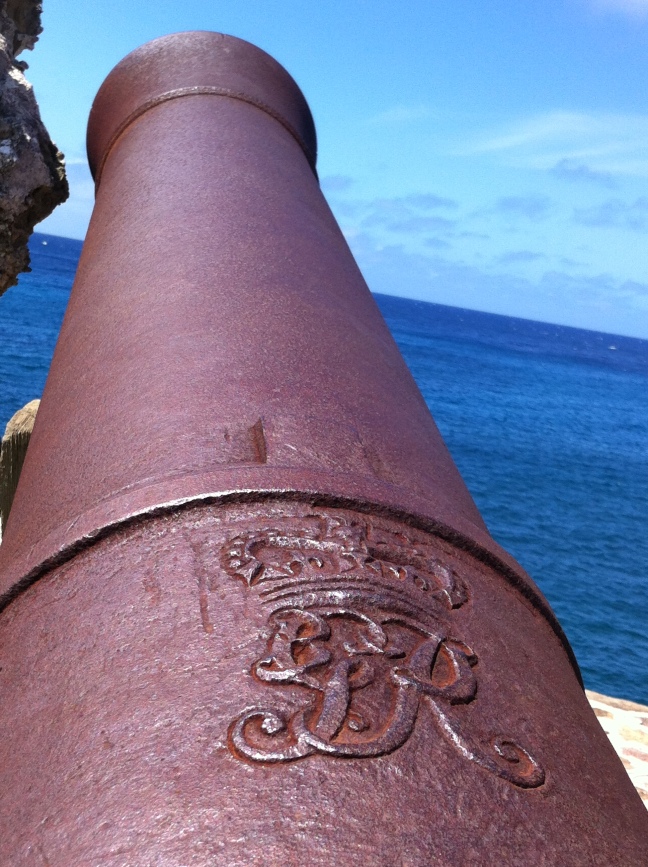 If you want to re-live real pirate stories, the walk past Nelson’s Dockyard will peel back the veil to the past better than any history books.

The dockyard has the impressive privilege of being the only existing example of a Georgian naval dockyard in the world and as such affords UNESCO protection. Building began in the 1720s in English Harbour and the dockyard was abandoned as a military base in 1895. I feel awed to walk in the footsteps of Admiral Nelson, in whose honour the dockyard is named, yet simultaneous images of Captain Jack Sparrow keep darting through my mind.

Visitors get more out of the experience than a walk down memory lane: the buildings in the dockyard have been superbly restored and are now occupied by hotels, cafés, bakeries and shops. Enjoy an ice-cold drink on the terrace of the Copper and Lumber Store, which houses the most elegant little hotel, and watch the present day yacht crews at thir work.

The famous flagstones have been trodden by royalty from Queen Elizabeth II who visited in 1964, 1966 and 1977 to Prince George (who became King in 1910) who arrived as a Sub-Lieutenant on board HMS Canada.

Soldiers had 3 main problems in English Harbour at that time – illness, rum and too many women and it earned it’s jovial title as ‘the grave of Englishmen’. Mosquitoes still abound but they no longer carry malaria in these parts. Women of course are still plentiful and Carnival is definitely testament to that. As for the rum, read on!

With reluctant children in tow, we passed through Nelson’s Dockyard towards the newly built yachting quay. Follow the path around the wall and onto the arid walking trail towards Fort Berkeley Point.

The way is hot and stony and I am happy to  wear runners on my feet and carry a bottle of water in my backpack. There are goats foraging for food along the way and they scarper when they see people approaching, leaving an easy, flat trail for us to follow. When we reach Fort Berkeley Point, the restored powder magazine and gun house offer welcome shade together with magical window-views over the scene that lay before the soldiers, as they defended the island from attackers.

The canons directed out to the ocean and the decaying wall where ‘cannonballs must have hit’ bring everything to life. The views across to Galleon Beach and into English Harbour across the sparkling water are mesmerizingly postcardesque in their prettiness.

For those who would like to explore further up the hill to the dilapidated fort, there are white paint splashes to guide the way on a gentle climb to soak in the panoramic views.

“Please can we invite our friends from Switzerland to visit, so that I can show them this place?” asked my son. He is 6. Despite the arid heat and the idea of walking anywhere for little legs, this was fun for the entire family (dogs should stay on a lead). Boys especially can visualise the epic bygone battles.

Grown-ups meanwhile, are aware of the problem that the plentiful supplies of rum ‘know no boundaries of time’, and head back to Nelson’s Dockyard for a welcome rum punch.

Join me, Jennie Ritchie, as I explore Antigua. Two years ago an opportunity beckoned me to this rock in the Caribbean! It’s friendly people, idyllic beaches, eclectic bar scene and especially the really exquisite artists and designers have enticed me to stay. Modern Antigua is an island of surprises where you can laze on deserted beaches or party with the locals in the heritage listed dockyard, sail into delicate coves, swim with stingrays or zipline over the rainforest canopy.
Book your tickets asap as there is nothing like an icy cold rum punch listening to the calypso music as you look from your verandah towards the shimmering cobalt blue sea views dusted with fringed palm trees and delicate sand beaches.
If you haven’t been here yet, be sure to sign up to my weekly column for exclusive interviews, reviews and artful photography that will inspire your next trip to beach chic Antigua.

Find what you are looking for